Dr. Gregg Marland, who holds a dual appointment with the Research Institute for Environment, Energy and Economics and the Department of Geological and Environmental Sciences, and Dr. Jeff Colby from the Department of Geography and Planning lead a team of four students in a research project determining which groups of people are most vulnerable to the effects of climate change.

“The four students have applied and strengthened skills in assembling and analyzing critical data and developing unique insights. They have located important sources of data and pursued ways to bring critical pieces of data together to examine the convergence of objectives,” said Marland.

Colby contributes to the conceptual development of the research, with geospatial technical support and works with graduate students.

“The part of the project, which I have enjoyed the most, is working with the students. The energy and quality of the work they have brought to this project is inspiring,” said Colby.

Former graduate students Leah Handwerger and Andrew Golden from the Department of Geography and Planning participated in the initial stages of the project in the Summer of 2020. Research support has come from the Research Institute for Environment, Energy, and Economics.

Students serving on the research team share their experiences and current work. 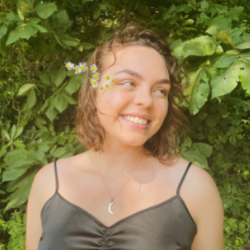 Caroline Fehlman’s research responsibilities include analyzing factors related to climate change burdens, responsibilities and resilience. The research’s purpose is to influence mitigation policies that alleviate environmental injustices. The final product of this research will be a published manuscript for the public’s viewing.

Burdens of climate change represent the worst possible outcomes of its effect on the environment and society. Responsibilities refer to who or what emits the most greenhouse gases and who, in turn, should be responsible for the impacts. Resilience is the capacity to resist or maintain the structure as well as recover from disturbance due to external forces such as natural disasters.

To further her research capabilities, Fehlman took a course on machine learning techniques this summer as much of her research analysis is conducted using machine programs. Over the past two years, she has become more familiar with computer languages such as R and Python. She has also been reading literature that discusses community resilience, disaster resilience, adaptive resilience and other categories of resilience related to climate change.

Dr. Dennis Gilfillan, a previous postdoctoral scholar at Appalachian, helped mentor Fehlman in her research. He currently works for the North Carolina School of Science and Mathematics and assists with Appalachian climate change research when possible. Gilfillan has primarily assisted Fehlman with coding and implementation of her analyses.

“With my research, my biggest takeaway was that I learned a lot from each of the students and faculty members about their research capabilities and ideas. We really learned from each other,” said Fehlman.

Fehlman recently received the GlaxoKlineSmith Women in Science Endowment through the College of Arts and Sciences. The purpose of the endowment is to recognize outstanding scholarship, to provide an incentive for women science students to enter the science profession and to provide students with a woman scientist mentor at Glaxo.

“I can’t wait to see where this project leads! I am excited for the possibility of continuing research in this field and seeing where the publications lead as well as being able to continue working alongside this group of researchers,” said Fehlman.

Fehlman is additionally pursuing a certificate in Geographic Information Systems (GIS). She plans to pursue graduate school and eventually a Ph.D. Her main goal is to teach mathematics to college students and additionally conduct environmental-related research. 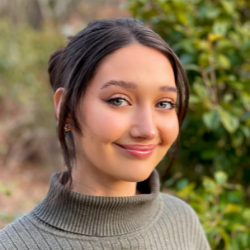 Caity Duncan analyzes carbon dioxide emissions from a variety of sectors, such as electrical production and residential energy use at the county level across the United States. This data, alongside other datasets, has allowed Duncan to create maps visualizing CO₂ emissions along with GDP production, in an effort to highlight the challenge of decoupling the economy and greenhouse gas emissions.

“I am interested in studying the geographic distribution of climate change and its impacts, specifically within underserved populations and communities. Findings from this type of research are essential in hazard mitigation planning efforts, which allow communities to better predict, prepare and build resilience to changing climate,” said Duncan.

She previously worked with Dr. Dennis Gilfillan and other researchers in RIEEE on the AT&T Resiliency Community Challenge Grant, a project aimed at examining climate resiliency in rural inland areas, with a specific focus on western North Carolina.

Duncan explained that the research process is not at all linear, but because of the challenges, it presents it is extremely beneficial and rewarding.

“I have had a tremendously positive experience working alongside faculty members and students at Appalachian. I have learned more about myself and my personal goals and interests, as well as the world around me,” said Duncan.

Duncan originally came to Appalachian because she values and appreciates its commitment to sustainability. She graduated this past spring with a degree in Geography - Community & Regional Planning, a Certificate in Geographic Information Systems (GIS) and a minor in geography. While pursuing her undergraduate degree she was also a member of the CAS Corps. She is currently an accelerated admissions student in the geography graduate program and will be a full-time graduate student this fall.

“This project is constantly preparing me for my career after graduation because it allows me to gain the unique experience of working in a diverse team composed of both faculty members and students, all with varying skill sets and research interests. Additionally, it has allowed me to learn much more about myself within a professional setting and the type of work I am interested in doing in the future,” said Duncan.

Following graduation, Duncan hopes to have the opportunity to travel to various cities around the world in order to observe different approaches to planning. She hopes this will allow her to take that diversified knowledge with her wherever she chooses to live and work. 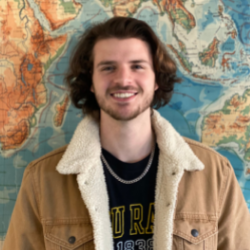 Nicholas Gastelle received his bachelor's degree in urban planning at Virginia Commonwealth University. He attended Appalachian for his master’s degree because of the geography program and ability to conduct research at the university. His current research interests are focused on urban areas.

“I am interested in urban density levels and optimum density for efficient resource use and lower environmental impacts. I am also interested in comparing global cities across various development levels to understand urban spatial use associated with wealth and consumption,” said Gastelle.

Gastelle’s research at Appalachian involves exploring the relationship between GDP and greenhouse gas emissions in the United States. Following the completion of the research project, his work will be featured in a published manuscript.

“Understanding that a decrease in CO₂ output has a unique relationship with GDP and overall sustainability was incredibly informative to see. An initial glance at the case map of U.S. counties would seem that the nation overall is decreasing CO₂ and on the way toward resource efficiency, yet a further examination of the magnitude of CO₂ and GDP reveals a more complex relationship. Understanding this relationship is really the goal of our research,” explained Gastelle.

He has thoroughly enjoyed being part of a research team at Appalachian and collaborating with faculty and other students.

“The patience and welcoming nature of the research group has been amazing. Everyone feels valued and that we can freely communicate without pressure or judgment,” said Gastelle.

Following graduation, Gastelle hopes to continue focusing on urban areas’ burdens and responsibilities of climate change in a professional setting. 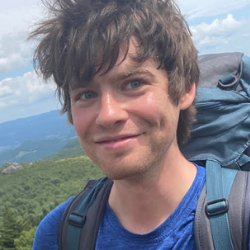 Andrew Bagwell attended the University of Arkansas for his undergraduate degrees in anthropology and biology. He went on to receive a master's in anthropology from Colorado State University before working for a few years in Madison, Wisconsin and deciding to attend Appalachian for a degree in geography.

“Boone seemed like an interesting place to move to, and I liked the idea of a small mountain town in an area of the country I had never been to before,” said Bagwell.

At Colorado State University, Bagwell worked with a research team studying the culture of hardcore video gamers, specifically those who inhabit “virtual worlds.”

Bagwell’s research interests have often been at the intersection between social and physical sciences. He is interested in economic development, the history of science, cultural ecology and political organization.

“More specifically, my main organizing interest is how different scales of society interact—what is the relationship between the individual, the community/subcultures, the nation and the world as a whole—and can we cause them to interact in ways that improve the well-being of all involved. In my experience so far, Appalachian’s geography department has embraced climate change as a problem that best fits its skillset and outlook as an intersection between physical and human sciences,” said Bagwell.

At Appalachian, Bagwell came wanting to study political geography and look at well-being at a subnational level—how different subnational political systems within individual countries lead to different development outcomes. Instead, he followed the department’s strengths and learned GIS. After reaching out to faculty for more credit hours to replace what was to be a thesis on political geography, Dr. Jeffrey Colby invited him to join his research team.

With his research at Appalachian, Bagwell’s main task so far has been to show at the county level what the changes in precipitation and temperature are projected to be in the U.S. in the middle of the 21st century. The two major variables in the predictions are

He has also been helping work on the manuscripts for upcoming publications and will transition into a literature review of the detailed effects of climate change on human and economic health.

Bagwell described the research process as what making a movie or video game is often like, “people get together and decide what kind of story they want to tell, what themes they want to explore and what some of the characters are. Ideas are thrown around in excess, the storyboard is enough for 3 movies and over time both the big picture and the small details morph to fit the overall work.”

About the Department of Mathematical Sciences
The Department of Mathematical Sciences offers undergraduate degrees in actuarial science and mathematics, with concentrations in business, computation, life sciences, physical sciences, secondary teaching and statistics, plus a general, self-designed concentration. The department also offers the Master of Arts in mathematics, with concentrations in college teaching and secondary teaching. Learn more at https://mathsci.appstate.edu.

About the Research Institute for Environment, Energy and Economics
Since 2008, Appalachian State University’s Research Institute for Environment, Energy and Economics (RIEEE) has fostered interdisciplinary research on the environment, energy and economics, especially the areas in which these subjects intersect. The institute serves as an umbrella organization for three centers: the Appalachian Energy Center, Center for Economic Research and Policy Analysis (CERPA) and the Southern Appalachian Environmental Research and Education Center (SAEREC). The work supported by RIEEE is integrated into Appalachian’s academic programs, used to facilitate discovery among K-12 student students and teachers, and employed in the region’s economic development. Learn more at https://rieee.appstate.edu. 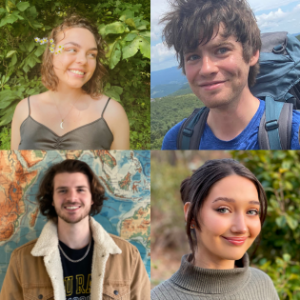 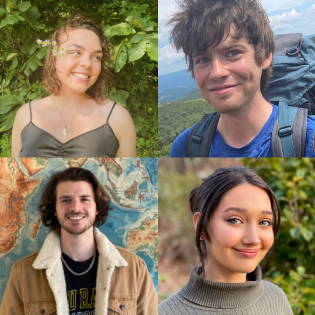