Faculty and student collaborate on advancements in earthquake science

For the last three years Dr. Scott Marshall, professor in the Department of Geological and Environmental Sciences, along with collaborators at Harvard University have been awarded over $137,000 to support their work on developing and improving the Southern California Earthquake Center (SCEC) Community Fault Model (CFM).

The Southern California Earthquake Center (SCEC) was created in 1991 to conduct essential research on how earthquakes occur and their effects in order to aid in assisting affected communities. SCEC researchers use many different cutting edge methods, including supercomputers, to analyze the potential seismic risk and hazards of earthquakes while also to better understand earthquake processes in general.

SCEC’s research is spread across numerous subdisciplines including (but not limited to) geology, geophysics, engineering, city planning and utility and insurance companies. The SCEC collaboration involves over 1,000 professionals, including Marshall, who currently serves as the co-leader of the Community Modeling Group (CXM), serves on the SCEC Science Planning Committee (SPC), and is a developer of the Community Fault Model (CFM).

“The CFM provides a detailed 3D representation of the shapes and sizes of faults underground in southern California. Before the CFM, geophysical modelers, engineers and city planners didn’t have access to this complex 3D data, but now, anyone can download a 3D model of all faults (fractures between two blocks of rock) in southern California without having to search through thousands of papers and compile the data themselves,” said Dr. Scott Marshall, Professor, Department of Geological and Environmental Sciences. 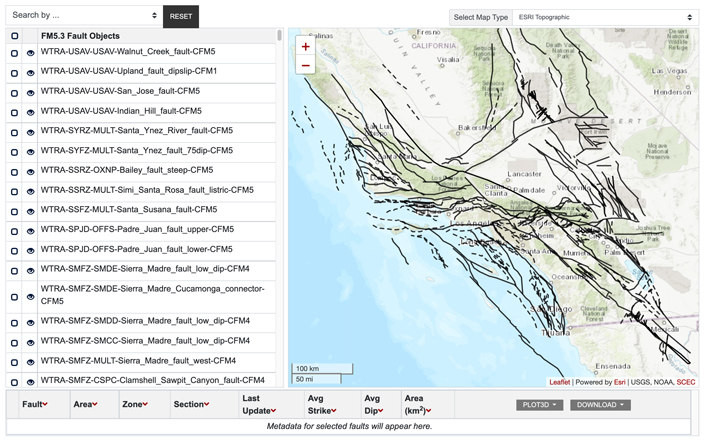 At the SCEC 2021 annual conference, which was held virtually this year, Marshall and his Harvard collaborators gave an invited oral presentation on the updates to the Community Fault Model and the new web tools developed to serve the model.

“Since this presentation, we have formed new partnerships with the United States Geologic Survey and the California Geologic Survey to better integrate the CFM into their hazard assessments,” said Marshall.

The Student Experience
This work with the SCEC has benefited Appalachian undergraduate students including Savannah Devine, a senior from Columbus majoring in geology with a concentration in quantitative geoscience. For the last four years, she has worked with Marshall on new computational models of faults in order to better understand the nature of earthquakes in the region. Using the data from the SCEC Community Fault Model and various physics-based computational methods, Devine and Marshall are able to predict both rates of contraction throughout the Los Angeles region as well as fault slip rates (how fast the two sides of a fault are slipping relative to one another).

“Through working with him (Marshall), I learned so much more about coding, how to use it and how it can apply to geophysics. I also learned, in general, how to do research. The fact that I started working with him so early allowed me to really see the research process from the beginning to where I am now,” said Devine. 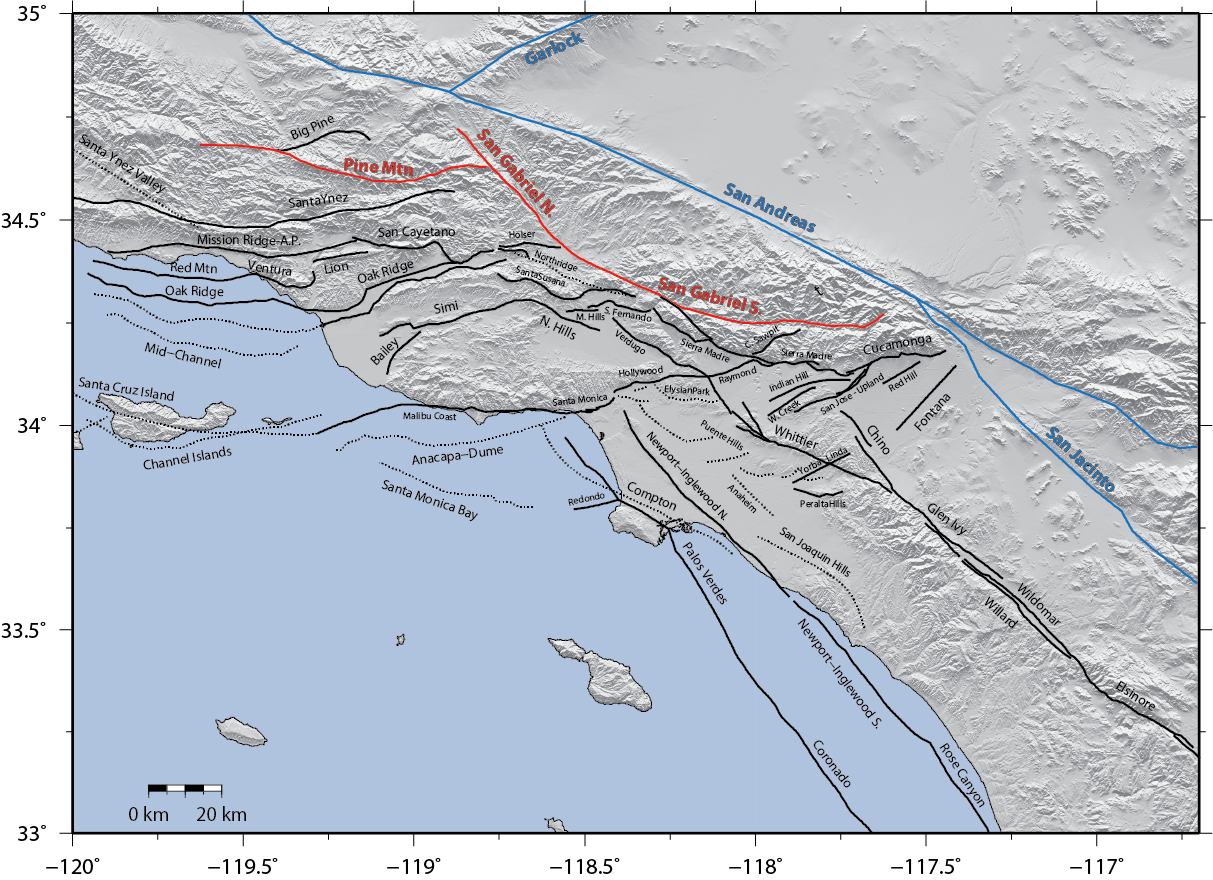 Fault trace map of the southern California faults modeled by Devine and Marshall. The modeled faults are three-dimensional, so this map just shows the upper edges of the modeled faults in their respective geographic locations. Blue faults have motion applied, while other fault motions are mathematically solved for.

Devine has completed internships with the SCEC and the Incorporated Research Institutions for Seismology (IRIS). She has also presented her research at the last two SCEC annual meetings and will be presenting the work she did with IRIS on simulations of the Cascadia Subduction Zone at the upcoming American Geophysical Union meeting later this year, which typically has more than 20,000 attendees from all over the world.

“I got to be involved in the process from the initial stage of ‘Will this even produce good enough results to make this worth pursuing?’ to getting really great preliminary results and having an idea of how this model could be used in the future. I also learned that geophysics is definitely the direction I want to go in for my career. I'm excited to see what the future holds and what I can accomplish in this field,” said Devine.

Devine participates in the Department of Geological and Environmental Sciences Answersphere, the in-house tutoring system for the department; assists in the McKinney Teaching Museum and is an undergraduate research assistant. She is also a current CAS Corps member, a student ambassador for the College of Arts and Sciences.

About Dr. Scott Marshall
Marshall’s research focuses on computational modeling of fault mechanics and satellite data analysis. His work involves creating algorithms to analyze spatial patterns of motions related to earthquake producing faults. He has been involved with the SCEC leadership since he was asked to co-lead a special project on the Ventura-Pitas Point fault, a fault that Marshall had previously researched and was speculated to be responsible for several Magnitude 8 earthquakes in the past.

About the Community Fault Model
The CFM is a resource that assists in a variety of modeling efforts and research that includes crustal deformation modeling, probabilistic seismic hazards assessments and urban planning. The Community Fault Model version 5.3 is the latest version of the model which is now accessible via an interactive web-based interface and is the most detailed and comprehensive three-dimensional representation of southern California faults to date. Web browser accessibility

“Historically, the CFM was generated manually by people. Now that the model is so large, we need to have some automation to ensure consistency. I have written several computer programs that automatically check the model for consistency,” said Marshall. 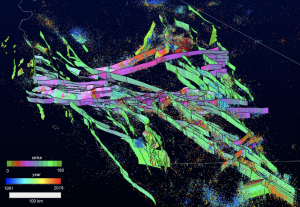 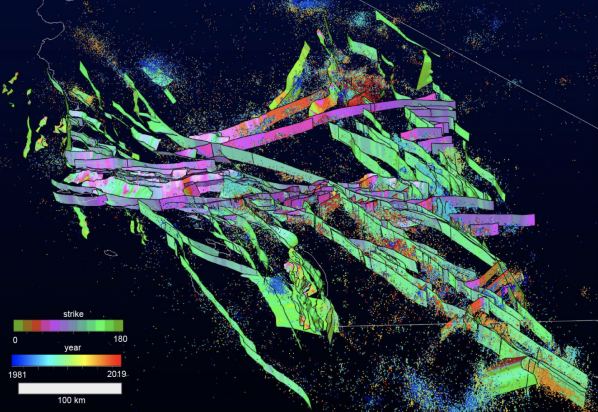 A oblique 3D view of a fault through the Community Fault Model version 5.3 visualized with Gocad. Faults are colored by orientation (strike) and relocated seismicity from Hauksson et al. (2012) colored by time.