The Department of Government and Justice Studies, in coordination with Academic Affairs, will celebrate Constitution Day with two virtual events this year.

“We hope this Forum will allow students to learn about the importance of police and community relationships, steps being made to address bias and increase cultural competency in law enforcement agencies, and evidence-based policies and programs currently utilized by these agencies,” said Cathy Marcum, professor and assistant chair, Department of Government and Justice Studies.

No registration is required to join the event, which is free and open to the public. Use this link to join the Wednesday, September 16 session https://appstate.zoom.us/j/99899438755?pwd=Mmd2UjNPTTQxUGREd0lsOE1panpkZz09

On Thursday, September 17, the Department will release a Constitution question and answer film with Pre-Law faculty in the department. To celebrate the U.S. Constitution’s 233 birthday, the faculty members will be answering student questions, explaining common misconceptions regarding the U.S. constitution and providing a few fun facts about the U.S. Constitution, which has 4,400 words and is the oldest and shortest written Constitution of any major government in the world. Participants will include Dr. Paul Lucas, assistant professor; Dr. Kirstin Morgan, assistant professor and Dr. Marian Williams, professor.

Jennings obtained a B.S. in Criminal Justice from Appalachian State University and a master’s in business administration from Pfeiffer University. He is also a graduate of the FBI National Academy and a graduate of the Senior Management Institute for Police. A native of Jefferson City, Tennessee, he played football as an All-American linebacker at Appalachian and was inducted into the University Athletic Hall of Fame. He joined the CMPD as a member of the 108th recruit class in May of 1992 and has held a variety of positions and ranks throughout the organization including sergeant over criminal intelligence, patrol sergeant and captain over the North Tryon Division, major over intelligence, investigations and special operations to name a few.

Dr. Lorie Fridell is a professor in the Department of Criminology at the University of South Florida. Fridell has over 30 years of experience researching law enforcement. Her research and other endeavors have been supported by over $7.5 million in grants, primarily from the U.S. Department of Justice. Her primary research areas are police use of force, police deviance and violence against police. Fridell is also a national expert on biased policing. She speaks nationally on the topic and provides consultation and training to law enforcement agencies. With national experts on the psychology of implicit bias and funding from the U.S. Department of Justice, she developed the “Fair and Impartial Policing” training program.

About Pre-Law faculty participants
Dr. Paul Lucas, assistant professor, earned his Ph.D. in Criminology from Indiana University of Pennsylvania. His areas of teaching and research focus on courts, problem-solving courts, evaluation and criminal justice policy. Prior to obtaining his Ph.D., Lucas worked within the magisterial, criminal and problem-solving court system in Pittsburgh, Pennsylvania, where he was also a liaison to community corrections offices and local and state correctional institutions. He also currently serves as the drug court evaluator for the 23rd Judicial District, Kansas. His most recent research has been published in Police Quarterly, Drug Court Review and The International Journal of Law and Psychiatry.

Dr. Marian Williams, professor, joined the Department of Government and Justice Studies in 2008. She serves as one of the pre-law advisors in the Department. She teaches courses in both the Criminal Justice and Political Science programs. Williams has conducted research on a number of law and court-related topics, such as the effectiveness of public defenders, the use of bail, race and gender disparities in capital punishment and civil asset forfeiture. Her research has been published in the top journals in the criminal justice field, including Criminology, Justice Quarterly, and Criminology & Public Policy.

About the Division of Academic Affairs
The Division of Academic Affairs is responsible for student learning and success at Appalachian State University, including oversight of the university’s challenging academic curriculum, active classroom environments, and close collaboration between faculty members and students on scholarly activities. Academic Affairs encompasses the degree-granting College of Arts and Sciences, College of Fine and Applied Arts, Beaver College of Health Sciences, Reich College of Education, Walker College of Business and Hayes School of Music; as well as the Cratis D. Williams Graduate School, the Honors College, University College and 12 other units that support the innovative, interdisciplinary and integrative academic experience for which Appalachian is known. Learn more at http://academicaffairs.appstate.edu. 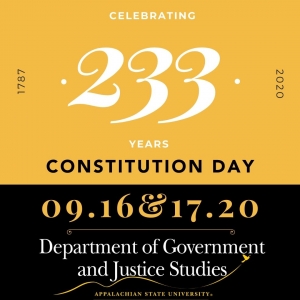 Constitution Day, being celebrated on Sept 16 & 17 this year at Appalachian. Graphic. 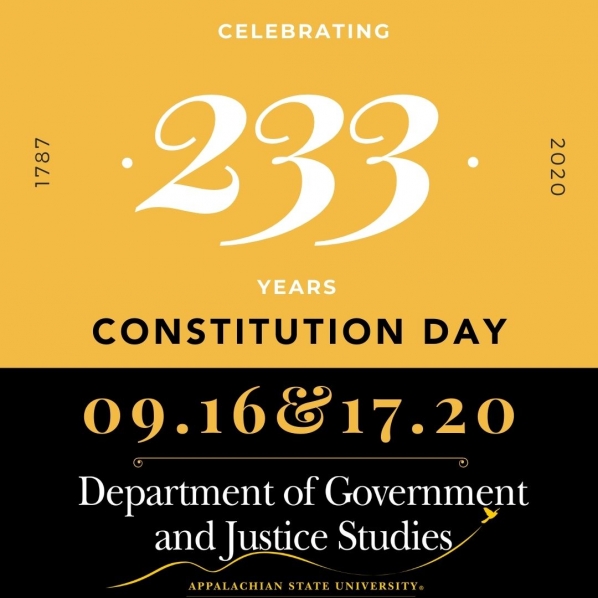