A myth that has long persisted in the lore of Black Mountain College, an experimental school located in the heart of the Blue Ridge Mountains during the 1930s, 40s and 50s, is that the school was isolated and had little to no interaction with the surrounding communities of Asheville, Swannanoa and Black Mountain, North Carolina.

In fact, students and faculty did interact with locals both on and off campus throughout the college's tenure. A new exhibition opening on Saturday, April 14 at the Swannanoa Valley Museum & History Center in Black Mountain seeks to tell the story of what happened when "town" met "gown."

After a winter hiatus, the newly-renovated museum located in downtown Black Mountain's historic fire house, will reopen for the season with "Black Mountain College and Black Mountain, North Carolina: Where 'Town' Meets 'Gown'" as well as a Hands-on History exhibit geared towards children and an exhibition and sale of 15 original paintings by local artist, Jerry Pope. The paintings will be on display through June 23 and depict the architecture that so defines Black Mountain's small-town charm; some still here, others long gone: Avena's Bowling Alley, In-the-Oaks, the 1921 Fire Station and City Hall.

The museum's Black Mountain College and Hands on History exhibitions will continue all season long, closing Dec. 1, 2018. The Swannanoa Valley Museum is located at 223 West State Street in Black Mountain and is open Tuesday – Saturday from 10 a.m. – 5 p.m. beginning Saturday, April 14. Admission is by donation.

Founded in 1933 by John Andrew Rice, a scholar who left Rollins College in Florida amid a storm of controversy, Black Mountain College was experimental by nature and committed to the arts and an interdisciplinary approach to learning.

The college was owned and operated by the faculty and all members of the college community participated in its operation - including farm work, construction and kitchen duty. From 1933 to 1941, Black Mountain College was located at the YMCA Blue Ridge Assembly. Its Lake Eden campus, used by the college from 1941 to 1957, is now Camp Rockmont for Boys.

The college is most often remembered for attracting many of America's leading visual artists, composers, poets and designers like Buckminster Fuller, Josef and Anni Albers, Ruth Asawa, Merce Cunningham and John Cage. But the artists the college nurtured are only part of the story.

The Swannanoa Valley Museum's exhibition is centered around a large geodesic dome (The geodesic dome was first erected by architect Buckminster Fuller while on staff at Black Mountain College). The dome features triangular panels showcasing photographs, stories and memorabilia recounting some of the lesser known history of the college – a history that reached far beyond the arts for which the college is best known.

Interviews with former students and faculty and local residents reveal that there was far more interaction between the two groups than previously thought. Students and faculty shopped in town, taught in local schools and hiked and camped with residents, while locals attended concerts and other performances at the school, swam in the lake and were employed by the college.

Having an experimental school in the Jim Crow South sometimes helped to combat misconceptions that each group held about the other – while at other times reinforcing these same stereotypes.

One student, Ruth Lyford Sussler, wrote, "One day I walked confidently into the little town of Black Mountain, sure that I would find the library. Feeling dismayed in not readily spotting it and inquiring of a person I met on the dusty road that was the main drag, I learned that the library was upstairs above the jail and 't-weren't open 'cept now and then.' I couldn't imagine any town without a library nor could I picture a library that was not open most of the time and that was located above the jail!"

In 1944, when Sussler was a student, the Black Mountain Library was located on the top floor of City Hall, above the police department, chamber of commerce, Western Union office, which were on the first floor and the jail – a holding cell which has been reconstructed in the exhibition – in the basement.

Also on display is the original 1944 Black Mountain Library sign. The hours listed are: Monday, Wednesday and Friday mornings from 10 a.m. until noon, Tuesday evenings from 7 p.m. until 9 p.m. and Saturday afternoons from 3 p.m. until 5:30 p.m. Interestingly, in 1961, a former Black Mountain College student, Dorothy Rugg McGraw, who married a local boy, became the librarian.

Stories like this abound. After the college's cafeteria closed, students would steal food from the A&P in Black Mountain with the help of a local check-out girl; a local man, out fishing for his dinner, ran into a "dirty old man" panning for gold in the creek, who turned out to be Albert Einstein, a guest lecturer at the school. One local woman who attended a performance in the college's dining hall remarked to a student, "I don't know what you were doing up there but I was with you all the way."

Put together in partnership with Appalachian State University, this exhibition will also feature elements from the university's Black Mountain College semester as well as from Boone, North Carolina's Turchin Center for the Visual Arts. 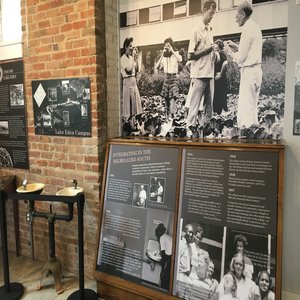 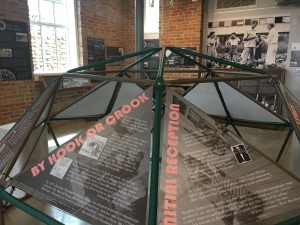 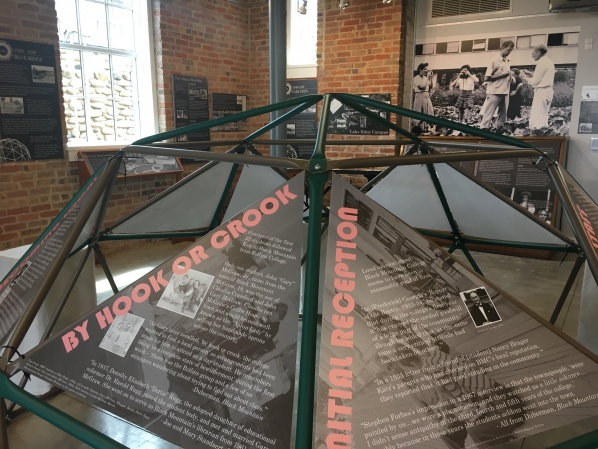