Psychology alumna Laura Yates Clark '99 gives back to the community

BOONE, N.C. — As the President and Chief Executive Officer (CEO) of United Way of Central Carolinas, College of Arts and Sciences alumna Laura Yates Clark '99 leads the effort to improve economic mobility in communities across Anson, Cabarrus, Mecklenburg, and Union counties. Clark earned her Bachelor of Science in Psychology from Appalachian State University and her Master of Arts in Clinical and Community Psychology from the University of North Carolina at Charlotte (UNCC). Her passion for community betterment has touched lives across North Carolina, demonstrating the lasting impacts of a comprehensive undergraduate education.

"It's sort of a fortuitous story. I didn't really set out with a very clear plan, but I majored in psychology and I fell in love with community psychology," explained Clark, a native of Charlotte. "A lot of people don't know what it is, but it's basically 'How do we bring the principles of psychology and healthy minds to communities?' and 'How do we center children and families in a way that strengthens whole communities?'"

Describing herself as a "pretty nerdy" student, Clark reflects on her time at Appalachian fondly. In addition to the scenery, she enjoyed how Appalachian was "big enough to feel like I was getting the education that I needed, and I had the right opportunities, but it was small enough to feel like somebody cared about me." Clark explained that the academic and research experience she gained at Appalachian was what makes her proudest to be an alumna. "I received the support that I needed and for me and what I was trying to do, that was probably what was most meaningful," she shared.

During her time at Appalachian, Clark volunteered with Oasis, Inc., a local nonprofit dedicated to ending domestic violence and sexual assault in Watauga and Avery counties. "Appalachian really encouraged community involvement and while that wasn't so much a requirement for graduate school, I think it helped steer the direction of my whole career," she said.

After earning her Master of Arts degree from UNCC, Clark first joined the United Way of Central Carolinas as a temporary employee. Clark ended up working at United Way for more than four years, eventually becoming the Director of Evaluation and Community Impact, where she tracked community indicators of wellbeing and collaborated with nonprofits on program assessment.

Following her research role at the United Way of Central Carolinas, Clark transitioned to a new position with The Council for Children's Rights, a child advocacy center in Charlotte. There, she served as the Director of Research and Planning and the Director of The Larry King Center, specializing in research, community planning, and public policy advocacy to improve community-level outcomes for children.

In 2013, Clark went on to become the founding CEO of the Renaissance West Community Initiative, an effort to revitalize the Boulevard Homes housing project in West Charlotte through comprehensive redevelopment featuring mixed-income housing and services for children and families. "What was unique about it was that it was a holistic model, so it also included a cradle-to-career education continuum, and all of the wraparound services and support that families would need to be successful. I worked with my board and other key community partners to build that from the ground up," said Clark.

Clark's expertise in strategic community improvement across the Charlotte metropolitan area led her back to the United Way of Central Carolinas in December 2016, when she joined as Chief Impact Officer. In 2018, she was named the President and CEO, the sixth leader in the organization's history. The nonprofit's mission is to advance economic mobility and racial equity through place-based and grassroots solutions. To further this mission, Clark's day-to-day responsibilities include making fundraising calls and presentations, meeting with community partners, reviewing budgets, and managing the board of directors. "When you run a nonprofit, some days you have to wear every hat, but I have a great team and am surrounded by people committed to our mission," Clark explained.

Spanning more than two decades, Clark's career advocating for children and families began with her undergraduate experience in the Appalachian State Department of Psychology. When asked what professional accomplishment she is most proud of, Clark explained that her work raising money for nonprofits and communities, especially in the wake of the COVID-19 pandemic, has been "a gift every day." In the future, Clark hopes to give back to her alma mater by mentoring young aspiring leaders, especially those from underrepresented populations.

"I didn't have the sense when I was in the University that I was going to go be a CEO, but I think maybe that was partly because nobody had ever suggested it to me as a career path." Clark continued, "If there are young women that need to hear that and want to hone the skills to be in leadership, particularly in the nonprofit sector, how could I support that? How could I champion those young women and make sure that they're getting the exposure they need beyond the University to build their network? I think that's one of the most critical things that alumni can do."

To learn more about United Way of Central Carolinas, visit uwcentralcarolinas.org. Are you an alumnus of CAS? Visit cas.appstate.edu/alumni/share-your-story to share your Appalachian experience. 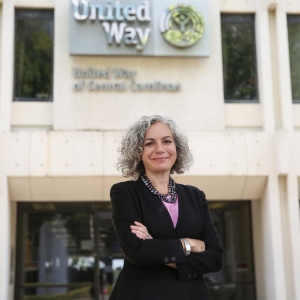 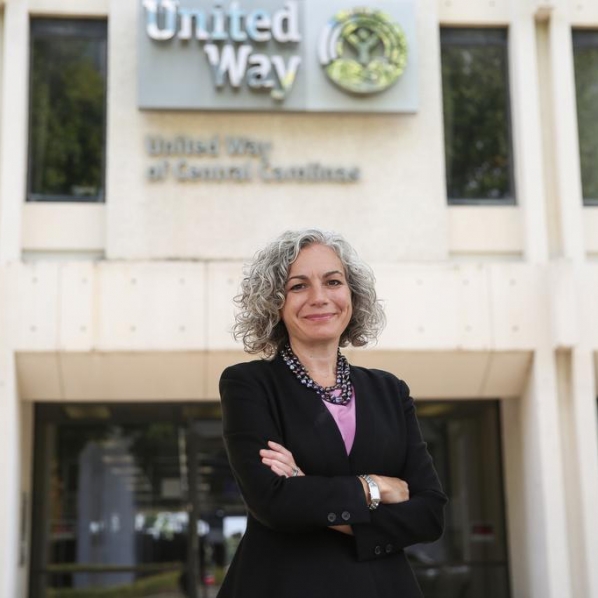