Students in Appalachian State University’s Department of Geological and Environmental Sciences get a unique opportunity each year to research something out of this world. Dr. Sarah Carmichael partners with the NASA educational loan program for access to their exclusive moon rock and meteorite specimens to bring lunar surface samples from the Apollo space missions to campus for analysis in her Petrology lab.

For the past decade, Carmichael, professor of fluid-rock geochemistry and biomineralogy in the department, has been diligently securing permission to bring these rare and unique samples into the lab at Appalachian. Inspired by her undergraduate educational experience at Smith College that gave her the opportunity to study lunar surface samples, Carmichael sought to  provide her students a similar experience. Witha lot of bureaucracy and paperwork, Carmichael has been able to have the rocks stored in the ammunition cabinets at the Boone Police Station for safe storage. Since the rocks are truly “irreplaceable federal property,” as described by NASA, they must be stored in a “safe place that can’t be moved,” stated Carmichael.

In order to prepare students for the lab, Carmichael shows the documentary, Apollo 11. This film, of never-before-seen footage and audio recordings from NASA’s historic moon expedition with Neil Armstrong, Buzz Aldrin and Michael Collins, provides students with more context before handling such precious samples. Carmicheal says the film also serves in providing students a sense of just how much work went in to getting these samples back to Earth.

“Dr. Carmichael did not have to cover lunar rocks or meteorites in this course but she went above and beyond and got us some of the most exclusive samples in the world,” said senior geology student, Tyler Grumelot, from Fayetteville, N.C. 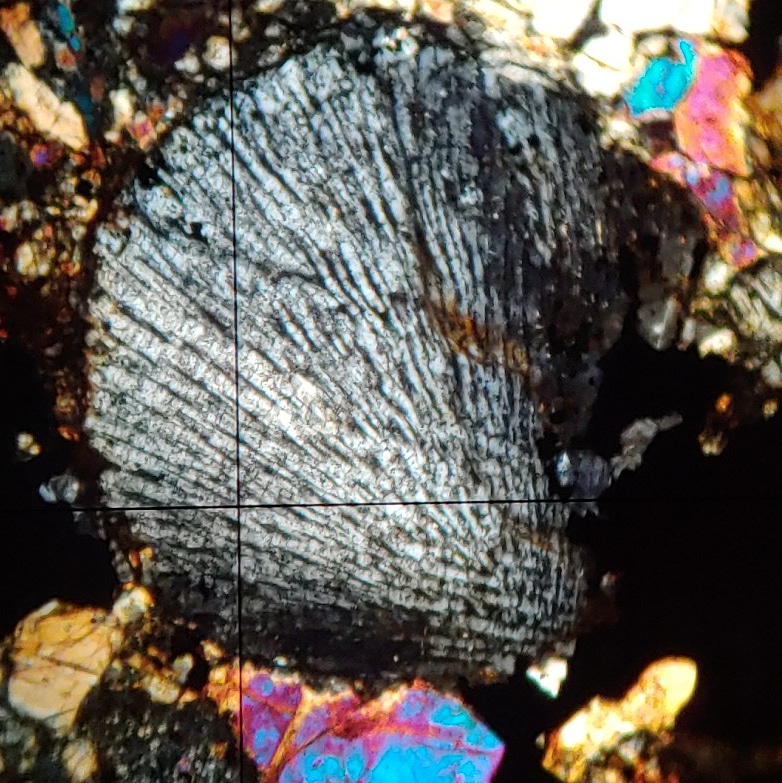 Pictured above is a barred olivine from a meteorite in cross-polarized light (25x magnification). This kind of  texture occurs when olivine, the mineral that makes up the mantle, also known as the gemstone peridot, is cooled rapidly from a melt. Photo provided by Dr. Sarah Camichael.

Observing the lunar samples for their easily identifiable physical properties, or their mineralogical properties, allows students to compare qualities of the moon rocks to common rocks found on Earth. Outside of a classroom setting, geologists use these identifiable differences between rocks to better interpret rock formation in space as well as the moon’s origins. Anthony Love, manager of the Department of Geological and Environmental sciences laboratories, studies these meteorites as part of his research program and teaches students in the class about the tools used to determine their origin and history.

“The lunar surface is much less dynamic than Earth which allows us to see what features are present just after a major impact,” said, senior geology student, Corey Dalton, from Hillsville, V.A. By observing the impact structures under the microscope, Dalton felt that he was able to better determine if a specimen found on Earth exhibits any extraterrestrial qualities.

“All of the samples had something different to offer. The lunar surface is much less dynamic than Earth which allows us to see what features are present just after a major impact...Now, when I look at the bright surface of the moon as an amateur astronomer, I can say that I have truly observed these features up close. Not many others can say that,” said Dalton. 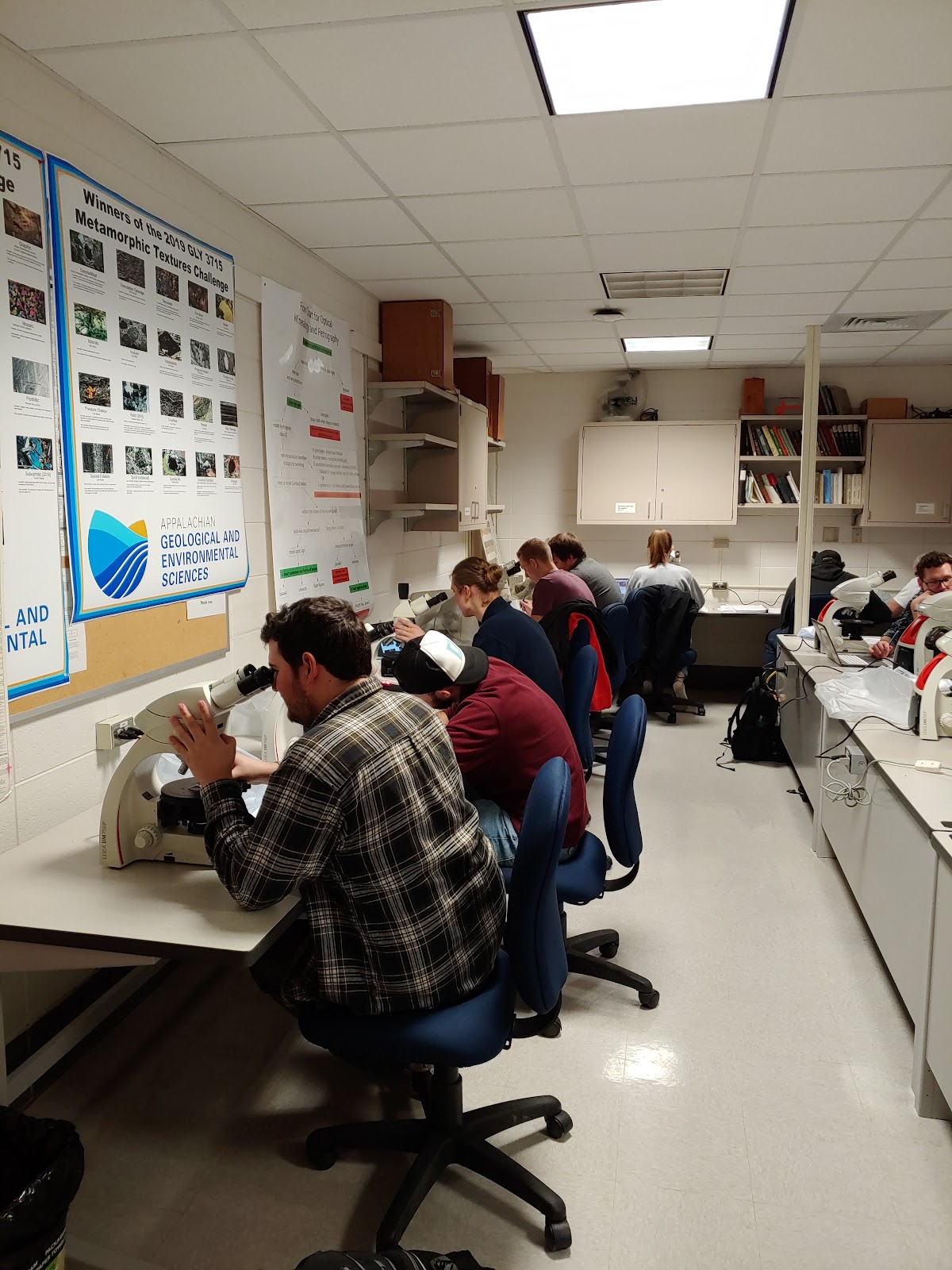 Rocks on Earth commonly go through a process called hydrothermal alteration, as groundwater, seawater or deep crustal fluids react with minerals to change their chemistry or break them down and form new minerals with water in their structure (like micas). However, because there is no water on the moon, Carmichael says students are able to recognize the role of water on Earth via the complete lack of hydrous minerals on the lunar samples. Students also learn what studies are used to determine a meteorite’s origins once landing on Earth. By learning to distinguish the differences between rocks originating in space, as compared to rocks originating on Earth, the evolution of our planet and solar system can be better determined.

Carmichael associates this lab with consistently being one of the highlights of her class, for herself and the students. Grumeolot definitely agrees, identifying his favorite moment of the lab as being able to hold some of the same moon rocks as Neil Armstrong and Buzz Aldrin when they first landed.

“This lab helped me realize how lucky I am to be a student at Appalachian.The professors here want us to have the best and most encompassing experience possible,” said Grumelot.

Although these important samples will travel on loan to other universities and institutions around the country, the experience gained from examining them remains an important and memorable part of many students' classroom experience in the department. 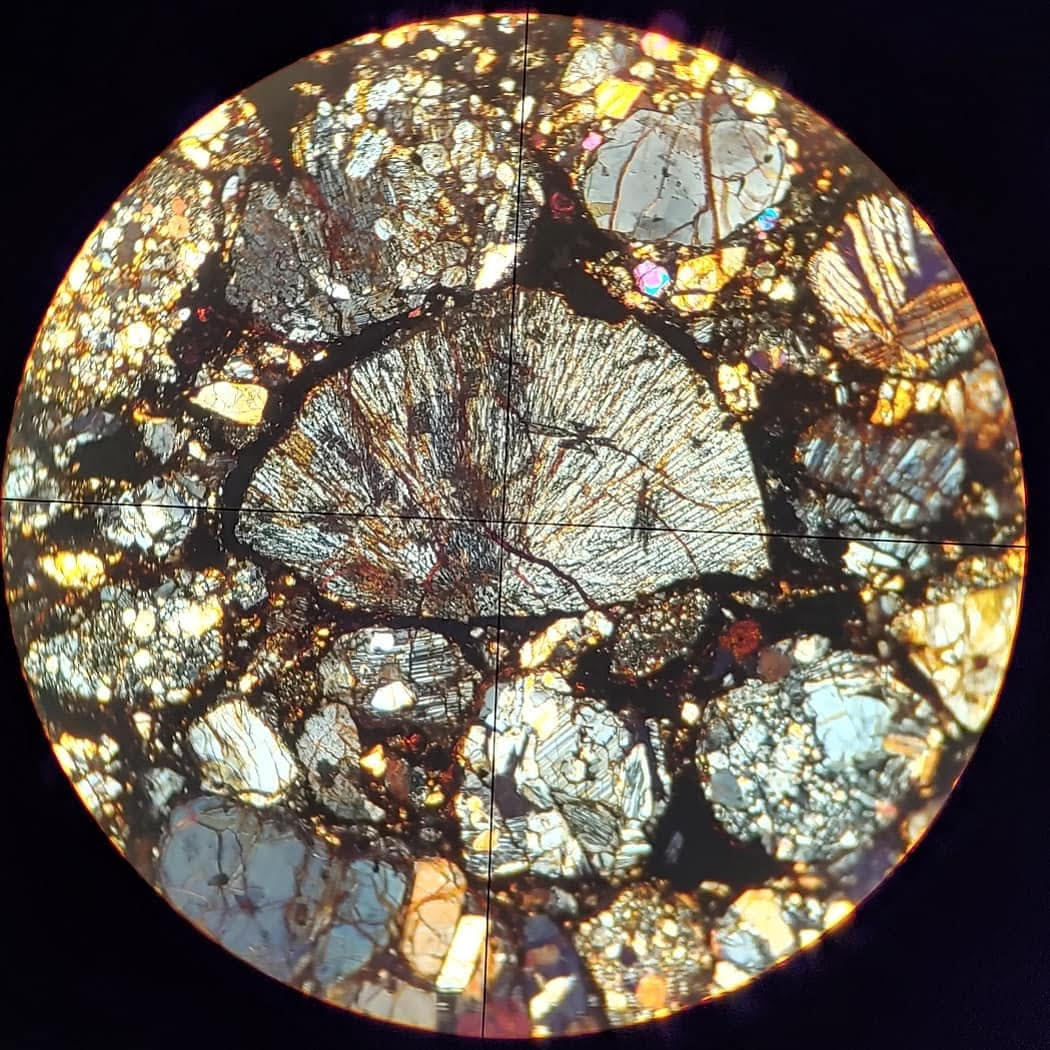 Pictured above is a barred olivine from a meteorite in cross-polarized light (25x magnification). This kind of  texture occurs when olivine, the mineral that makes up the mantle, also known as the gemstone peridot, is cooled rapidly from a melt. Photo provided by Dr. Sarah Camichael.

About the NASA Lunar and Meteorite Petrographic Thin Section Program for Colleges And Universities
Petrographic Thin Section Packages containing 12 polished thin sections of samples from either the Lunar or Meteorite collections are provided to colleges and universities having a curriculum in the geosciences. Each set of 12 slides is accompanied by a sample disk of representative lunar or meteorite samples, embedded in acrylic disks suitable for classroom use and teaching materials. The thin section package is intended for use in college and university courses in petrology and microscopic petrography for advanced geology students. The loan period is very strict and limited to two weeks. For further information or questions, visit: https://curator.jsc.nasa.gov/education/thinsections.cfm#. 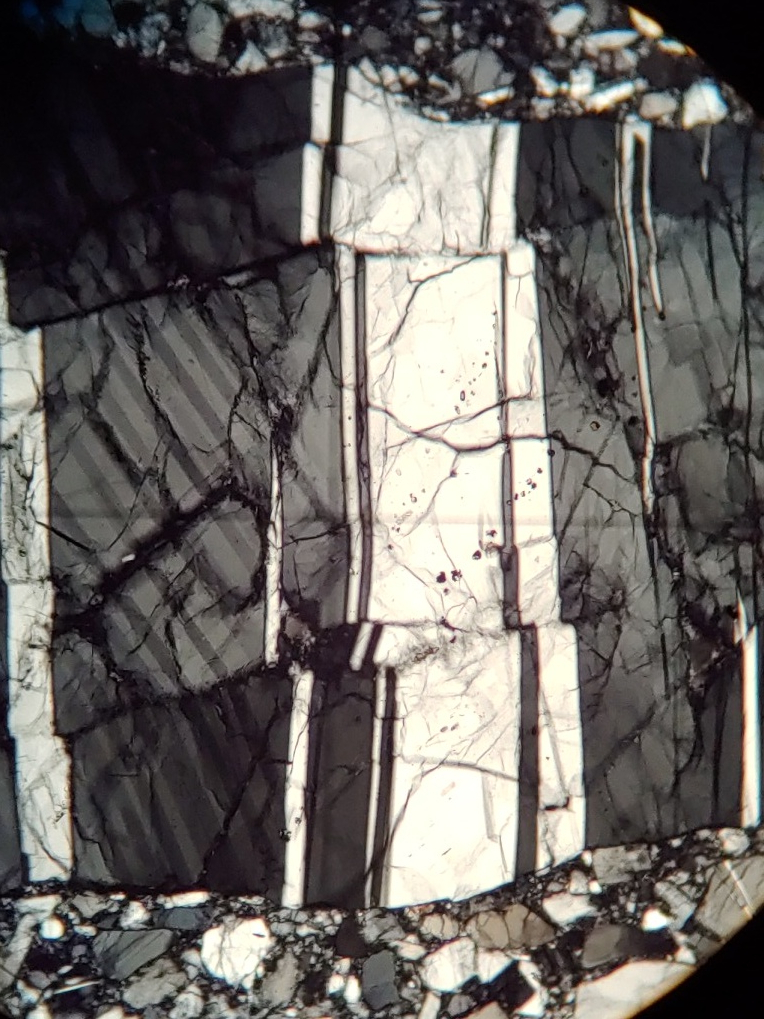 Pictured above is a shocked plagioclase feldspar crystal under cross-polarized light (25x magnification). Plagioclase  feldspar is a very common mineral on both the Earth and on the moon. In this case, the mineral has been hit so hard by a meteorite that it's crystal structure has been damaged. The black and white stripes are crystal growth patterns (which occur when a crystal's structure gets reversed or twisted as the crystal grows), but in this case they are broken and indicate how the crystal's structure has been damaged due to impact, even if the crystal itself has not been shattered. These stripes are great for showing strain and impact. Photo provided by Dr. Sarah Carmichael. 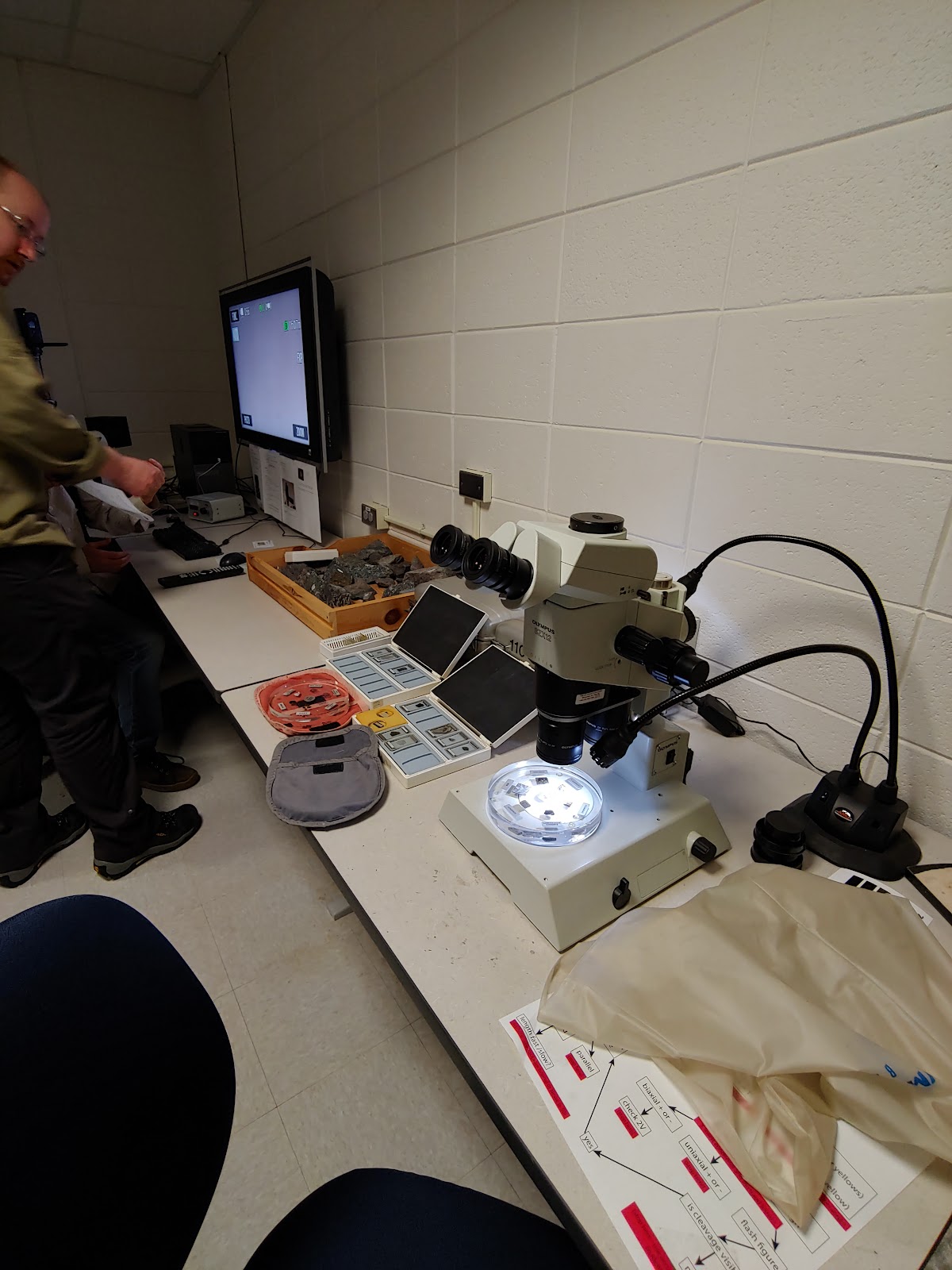 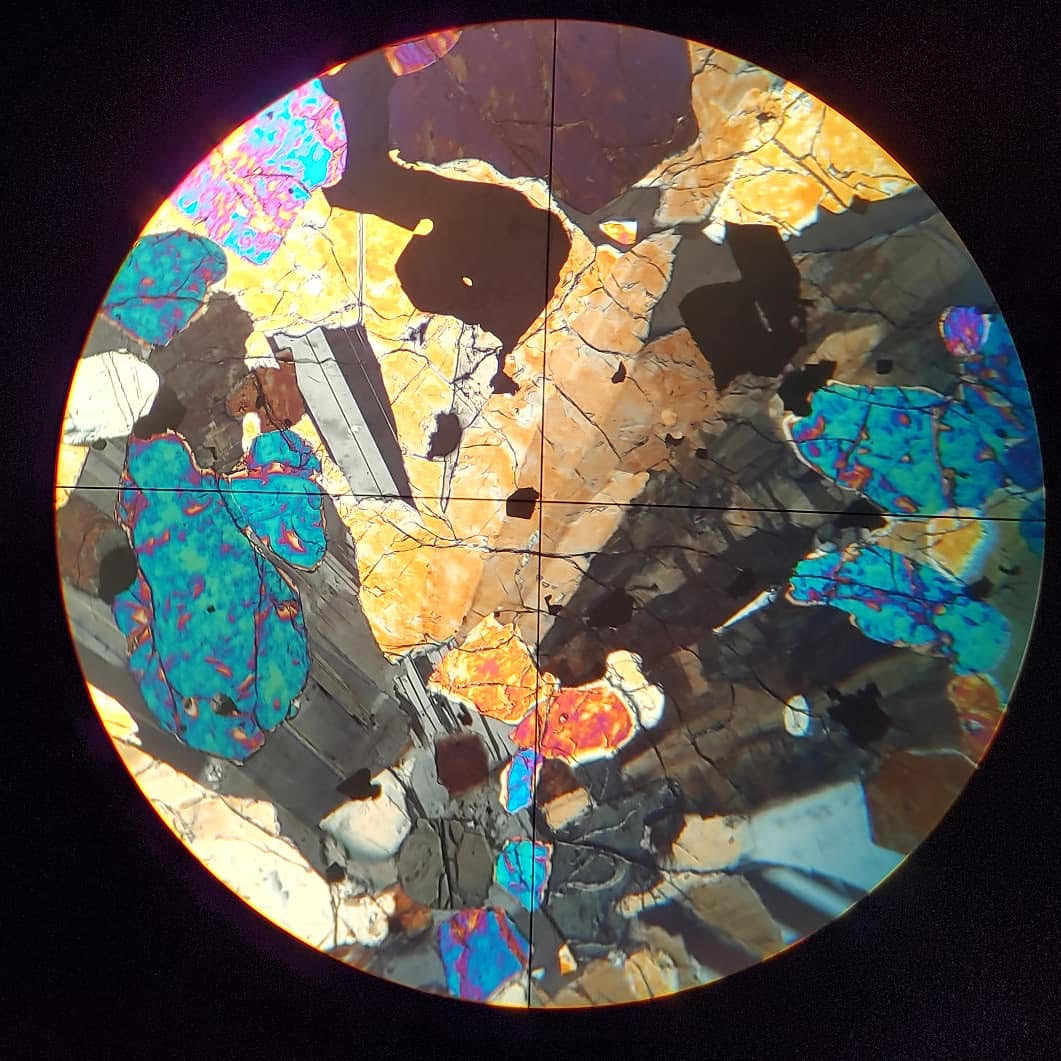 This image is of plagioclase and pyroxene crystals from the lunar surface (cross polarized light, magnified 25x). This rock is very similar to our oceanic crust on Earth, but does not contain any minerals with water in their structure, nor any other hydrothermal alteration, because there is no water on the moon. Photo provided by Dr. Sarah Carmichael. 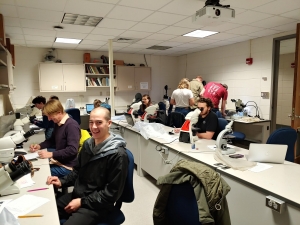 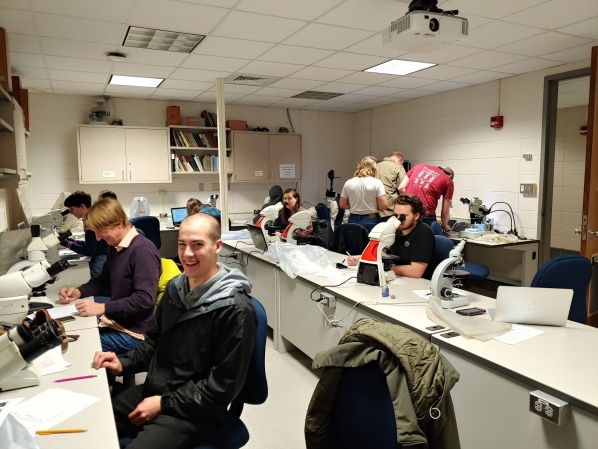