Appalachian State University senior, Kevin Tian, is working with the NIH-EPA in Durham, North Carolina on improving the Fertilizer Emission Scenario Tool for CMAQ (FEST-C). Used to facilitate large scale integrated agriculture, atmosphere and hydrology simulations, the FEST-C is a Java-based interface system. Tain explains this Java-based interface system as, “a programming language used to write code and application that can be interacted with on a computer using google chrome, spotify, microsoft word, etc.” This system is currently in use by environmental and biotech companies.

Tain’s responsibility is to help improve the system and the clarity of its functions, with the hope of reducing the amount of prior computer science knowledge needed to operate the system. This development would make the systems more user-friendly, allowing the user to focus primarily on using the system for research purposes. Tain will also be receiving a stipend as a result of his internship.

As a lover of college sports, Tain is involved in two game leagues, including Overwatch and another online team-based game called Quake. Overwatch is an online team game with two teams of six playing against each other that was started by Tain over two years ago. Overwatch competes in the Tespa Overwatch Collegiate Championship series, which is a league that over 250 universities in North America compete in.

With the Appalachian Quake team, Tain and his partner, Patrick, competed amongst 60 teams at a national level at the Collegiate Star League Quake Champions tournament, coming in second and winning a $15,000 prize.

Tain also enjoys spending his time hiking and playing guitar. After graduating, he hopes to find a job where he can gain more field experience and potentially pursue an M.A. degree.

About The Department of Computer Science
Appalachian’s Department of Computer Science provides a rigorous, high-quality education that prepares students for the computing industry or graduate education. It offers a Bachelor of Science degree in computer science, which is accredited by the Computing Accreditation Commission of ABET and a Master of Science degree in computer science. Learn more at https://compsci.appstate.edu. 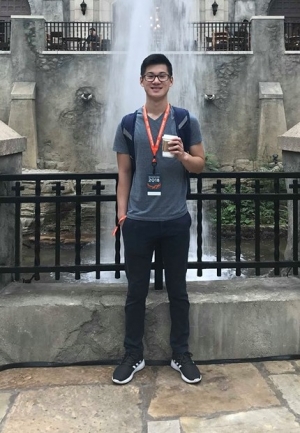