Appalachian State University’s Center for Judaic, Holocaust and Peace Studies invites the public to a Zoom-based event featuring Dr. Noah Shenker from Monash University, who will join us live from Melbourne, Australia. The event will focus on Shenker’s much-noticed work on Holocaust survivor testimony. It is also the first of many programs that the Center will organize to remember and honor the legacy of its recently-deceased former director Professor Rosemary Horowitz z’’l, who coordinated the invitation for this guest last year.

Dr. Noah Shenker is the N. Milgrom and 6a Foundation Senior Lecturer in Holocaust and Genocide studies at Monash University’s Australian Centre for Jewish Civilisation in Melbourne. He holds a Ph.D. in Critical Studies from the University of Southern California’s School of Cinematic Arts. Shenker’s research and teaching traverse Jewish studies, Holocaust and Genocide studies, cultural studies, and cinema and media studies.

That interdisciplinary approach was at the center of his first book, "Reframing Holocaust Testimony," published in 2015 by Indiana University Press as part of its Modern Jewish Experience series. Organized within a comparative framework, his book looks at three of the most extensive and distinctive archives of Holocaust testimony in the world: the USC Shoah Foundation Institute, the Fortunoff Video Archive for Holocaust Testimonies and the United States Holocaust Memorial Museum. Shenker investigates how the cultural and institutional histories and practices of those sites mediate the encounters between interviewers and interviewees and consider the extent to which testimonies are driven by the agency of witnesses and the itineraries of a given archive. In addition, he has written and published extensively on the representation of the Holocaust and genocide in testimony, film and new media. His contributions include “‘I have never begun by asking the big questions’: Raul Hilberg as Historical Revenant in Shoah,” in the edited volume, "The Invention of Testimony: Claude Lanzmann’s Shoah in the Twenty-First Century "(Wayne State University Press, 2020) and “Through the Lens of the Shoah: The Holocaust as a Paradigm for Documenting Genocide Testimonies,” in "History & Memory "(2016).

His current project (with co-author Associate Professor Dan Leopard) on which the talk is based -- and which is a parallel project to a joint research endeavor of the Holocaust program at Western Galilee College, the Center for Advanced Genocide Research at the University of Southern California Shoah Foundation and Appalachian's Center for Judaic, Holocaust and Peace Studies -- explores Holocaust testimony beyond the "Era of the Witness" (A. Wieviorka).

Like all of the Center’s Research Colloquia, this program is based on

Please note that this event was originally scheduled for April and was postponed.

This event is organized by the Center for Judaic, Holocaust and Peace Studies and co-sponsored by Appalachian's Department of History, Appalachian's Chapter of Hillel and AEPi, and the Temple of the High Country.

For more information, please contact the Center at 828.262.2311 or holocaust@appstate.edu. 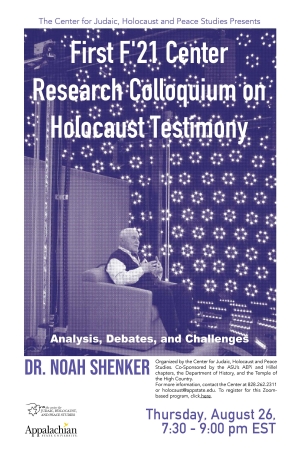 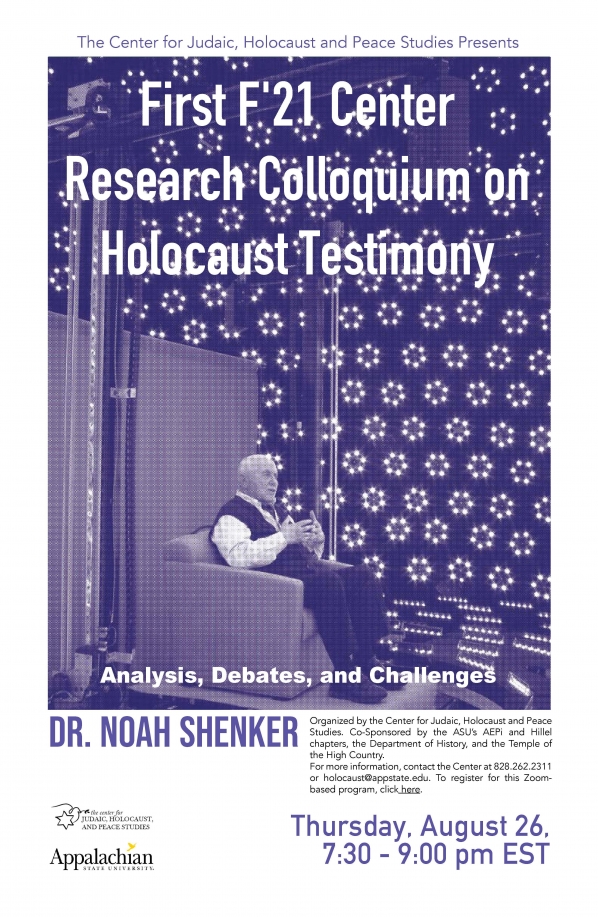