20th Summer Symposium on the Holocaust: Screening of New Documentary on Polish-Jewish Village and Director Talk

Appalachian State University’s Center for Judaic, Holocaust, and Peace Studies invites the public to a screening of the new Holocaust documentary "Three Minutes: A Lengthening." It will be followed by a discussion with prominent Holocaust scholar Dr. Michael Berenbaum (American Jewish University) and the renowned Holocaust educator and survivor Dr. Miriam Klein Kassenoff. The screening will take place in the Grandview Ballroom in the North End Zone Building at Kidd Brewer Stadium on Monday, July 25, 2022, from 7 - 9 p.m. The film's director, Bianca Stigter, will respond to questions live from the Netherlands the following morning, Tuesday, July 26, 2022, from 8:30 - 9:15 a.m.

"Three Minutes" is based on Stigter's short film essay “Three Minutes – Thirteen Minutes – Thirty Minutes." Both films were inspired by the book "Three Minutes In Poland: Discovering A Lost World In A 1938 Family Film," in which author Glenn Kurtz tells the story of three minutes of footage shot in the town of Nasielsk, Poland by his grandfather David who was visiting from the U.S. in the summer of 1938. Stigter's documentary on this home-movie footage captures and reflects on a rare visual record of a Jewish community that German forces would soon obliterate in the Holocaust. Her research for the film took her to Nasielsk in order to speak with residents. She also interviewed one of the few survivors, Maurice Chandler, in Detroit. "Three Minutes" is co-produced by the filmmaker’s husband Steve McQueen, with whom she has also worked on a number of other projects, including the critically-acclaimed feature film “12 Years a Slave.”

This event is part of the 20th Anniversary Annual Martin & Doris Rosen Summer Symposium on Film and Photography During and After the Holocaust, by Appalachian State University’s Center for Judaic, Holocaust, and Peace Studies. Since its inception in 2002, the purpose and goal of the symposium has been to provide information and insights about the victims, perpetrators, and consequences of the Nazi Holocaust. For more information, please visit the Symposium website at https://holocaust.appstate.edu/teachers.

The event is free and open to the public. For more information, see https://holocaust.appstate.edu/node/481. 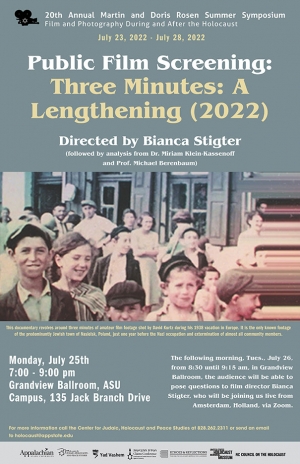 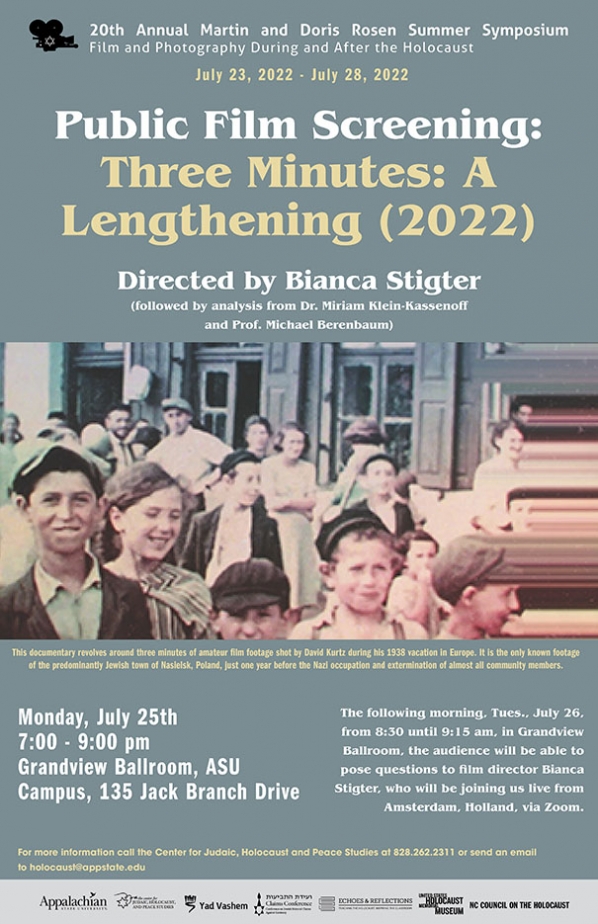