Peter Feigl will speak about his experience as a child survivor of the Holocaust during his presentation "From Le Chambon sur Lignon to Figeac: Documenting Survival in Hiding in Southern France in Photographs" on Tuesday, July 26, 2022, from 7 - 9 p.m. in the Grandview Ballroom in the North End Zone Building at Kidd Brewer Stadium.

Feigl was born on March 1, 1929, in Berlin, Germany. He was the only child of Ernst and Agnes Bornstein Feigl, non-practicing Jews, who moved to Vienna in 1937. His father, a mechanical engineer, worked for a multinational company that sold automotive equipment throughout Europe, while his mother stayed home to raise Feigl in an upper-middle-class environment. Once relocated to the Austrian capital, Feigl was baptized in the Catholic Church in the hope he would be shielded from antisemitism. When Nazi Germany annexed Austria in March 1938, the family fled West. Along with his mother and grandmother, Feigl was detained as an enemy alien by French authorities after the start of the German invasion in May 1940. They were released after the French defeat. With the help of local nuns, they settled in Auch, west of Toulouse, in Vichy, France. In the summer of 1942, the Vichy government under the leadership of Marechal Petain rounded up Jews, whom the Germans deported East. In late August, Feigl’s parents were arrested. The Germans deported them to Auschwitz, where they were murdered within a month. Feigl, who had been away from his parents in a Quaker summer camp, was sent to the predominantly Protestant village Le Chambon-sur-Lignon. He was one of some 3,500 Jews hidden and sheltered in the village and surrounding areas. With false papers, Feigl became a boarding student at a high school in Figeac, France. During these months, he took countless photographs capturing his experiences and struggles.

In May 1944, the Germans raided Figeac. Feigl escaped, reaching and crossing the Swiss border with the help of the Jewish underground. He immigrated to the U.S. in July 1946, where he pursued a private-sector career in international sales of aircraft. He also served five years as a Senior Negotiator in the Office of the Secretary of Defense. After his retirement, he became a volunteer at the United States Holocaust Memorial Museum.

This presentation is part of the 20th Anniversary Annual Martin & Doris Rosen Summer Symposium on Film and Photography During and After the Holocaust, by Appalachian State University’s Center for Judaic, Holocaust, and Peace Studies. Since its inception in 2002, the purpose and goal of the symposium has been to provide information and insights about the victims, perpetrators, and consequences of the Nazi Holocaust. For more information, please visit the Symposium website at https://holocaust.appstate.edu/teachers.

The presentation is free and open to the public. In addition to the in-person program, the lecture will also be accessible via Zoom. For more information, see https://holocaust.appstate.edu/node/480. 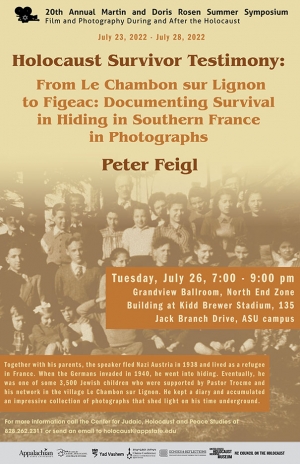 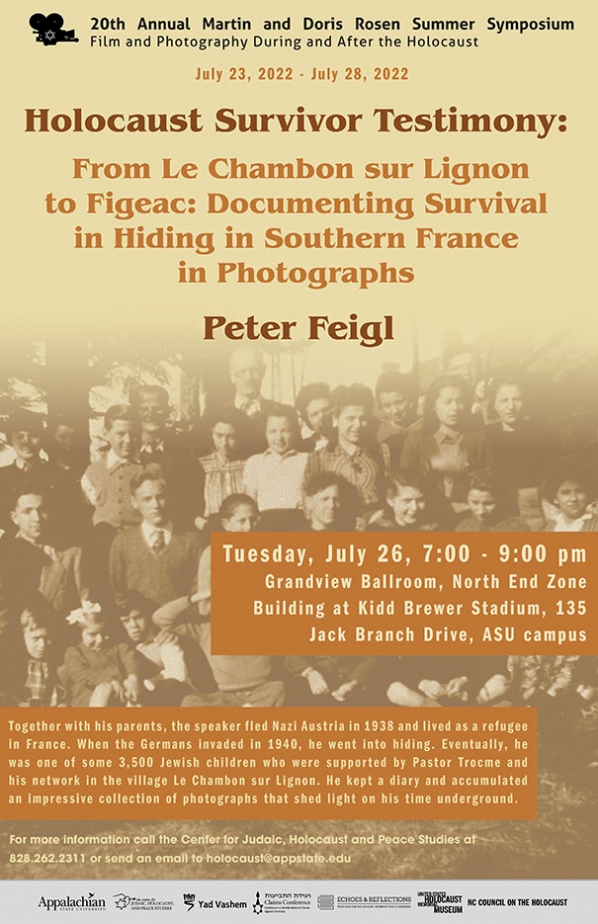